Riddles in Mathematics – TransWorld Does It Again 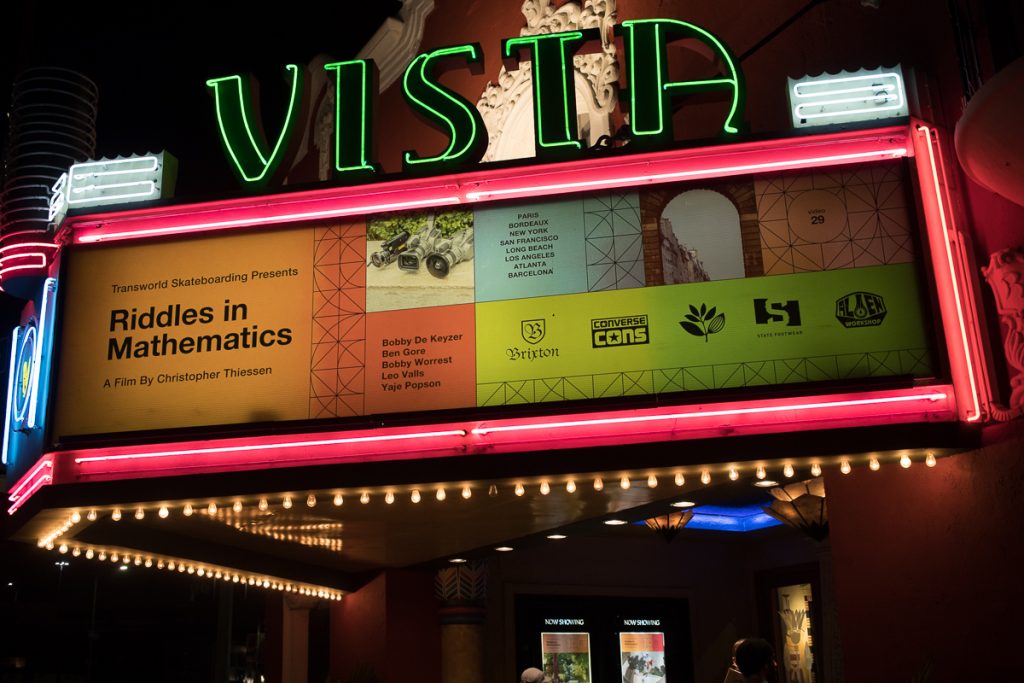 Video Reviews
Riddles, when we first heard the name, seemed like a riddle in itself. But “Riddles in Mathematics” was and is the twenty ninth TransWorld Skateboarding full-length feature video, and it breathes with a personality all its own.
Chris Thiessen wastes no time with any intro and gets right to the meat on the bone, SF’s favorite line skater, Ben Gore. An opener perfect for the direction of the film, Gore threads tricks together like he was born to do it, and he probably very well was. The music holds a theme of eccentric jazz club live jams, which is maintained throughout the first good half of the production. Much like the skating, the music makes sudden turns in every direction and shows the audience different angles of each spot, each trick, each approach, some too quick to notice. Bobby Worrest comes in for relief with the second part and holds it down with his classic skate rat style. One trick to the next, the skateboard purist shows us how we all do it in our dreams, and still to the same zany soundtrack of the film Thiessen has masterminded.
The lack of predictability is the only common thread in this film, for there are flip tricks, ledge lines, manual trick fun and fast skating throughout. Bobby DeKeyzer holds it down for the Canadian rippers and the CONS crew, bringing in some more technical skating, but still with the line-threading technique that makes the film so dynamic and fun to watch. Killing one spot at a time, while Thiessen captures it with style and edits it with grace. All the while, Friends sections and breakaway footage to other skaters, including a solid 10-12 tricks from SoCal’s own Stevie Perez.
Riddles takes the viewer through a very European experience, with many of the spots being there. But the exotic Euro vibe continues through Los Angeles and New York footage alike. Keeping the trend alive, Leo Valls’s part in the video maintains the creative vibe of skating, as he always seems to do on a board. Leo says screw your bag o’ tricks, and enjoy the ride! Too humble to say, “Watch me do my thing!” With powerslide, beanplant and nollie trick combos impossible to see coming, he kept us all on our toes just long enough to bring us to the video’s “ender.”
And Yaje did NOT disappoint. Now PRO for Alien Workshop, Yaje Popson came correct with a style and trick selection all his own. Fitting Thiessen’s vision yet expressing himself without apology, Yaje showed the world (once again) why & how he is a “G”, for those that catch the drift. The quick feet carry him under, over and across spots in a way that we only wish we could. For the sake of giving away nothing more, Yaje came to impress and succeeded. Chris and everyone involved at TransWorld did their thing and kept a legacy alive. Although the annual TWS video came through as it usually does, the film (and those of the past few years) defined itself in a way that implied, “We know the future. Let us show you for forty minutes…” Never relenting, always pushing forward.
Riddles in Mathematics.
P.S. the extra footage, second & third angles, b-roll and everything else that came with the (purchased) video was worth every penny. A packed product. All killer, no filler.
Previous Post Next Post

That trick though... 🧡 What's the trick you've

What better feeling than sliding those rails on wa

Need a good cruiser with rails? Check out this Bea

A real legend on some real crust 💪 @chrispfanne

The most casual @carlisleaikens in NYC ♻️ @cho