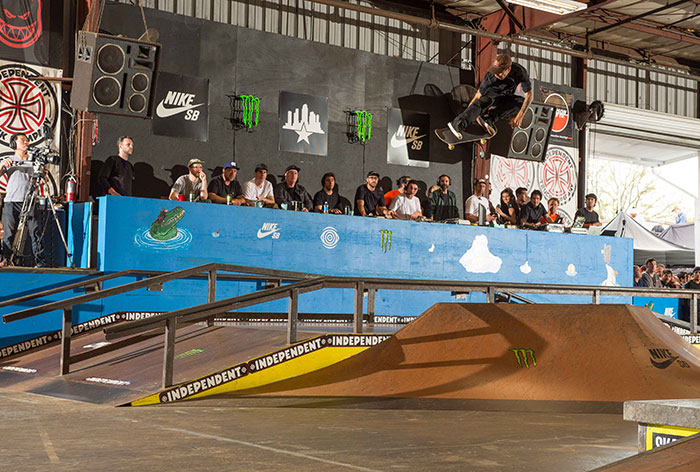 So there we were again, in the humidity of the Floridian gulf coast. Walking past the final gate with wrist bands in tow. Mentally prepared for what’s to come, the best & the worst alike. It was that time again… Tampa Pro 2017, the 23rd annual, was firing in full force by halfway through that Friday, the day of Practice. Everyone, from Ishod and Luan to Lizard and CK1, was there. Perhaps this contest will always attract every skater that can possibly make the trip.

There’s a grungy feel to the skatepark, mixed with ultimate opportunity for shenanigans of any size or shape… SPoT is truly the place to relax and get weird, but usually if you’re a true skate rat. Every flavor of talent is under one roof: the tranny gods, the rail chompers, the tech wizards… Everyone. They all flew in for the weekend (and some longer than that) for that Tampa, Florida fix. If you’ve never been to a big event (Tampa Pro and/or Tampa Am) at Skatepark of Tampa, it needs to go right up to the top of your bucket list now. It’s already begun to change… There was no moat race this year… When there always has been… Not good for a new, clean image..? I guess we’ll never know. But no one (legally) submerged themselves in the fabled moat.

Other rad things were rising though… Arctic played a show at the park on Saturday night (yes, that’s Figgy, the Nuge & Frecks), Ray Barbee and Evan Smith played sets (separately) the night before, and DJ Romar (yes, Kevin Romar) jockeyed those discs after the Jenkem Best Trick contest on the concrete area outside. Nike premiered a short new video, featuring Ishod and Grant… Beers were had, tricks were landed [bolts] and bragging right s were distributed.

If you haven’t been clicking through this story, you done messed up because there’s lots of good stuff. At the end of the weekend, Louie Lopez took home his first Tampa Pro win! Shane O’Neill secured his second consecutive best trick title, and Cody Lockwood locked in a best trick win on the concrete section, including that strip club plexiglass extension. Shouts out to Luan Oliveira and Kelvin Hoefler on their 2nd and 3rd place finishes, respectively.

Don’t miss out next year! And for even more coverage check this vid:

That trick though... 🧡 What's the trick you've

What better feeling than sliding those rails on wa

Need a good cruiser with rails? Check out this Bea

A real legend on some real crust 💪 @chrispfanne

The most casual @carlisleaikens in NYC ♻️ @cho